From cool blue ice She melted into the serene rill below and swirled Her way down the slope.  A cup dipped into the water and She felt Herself poured over a sun-beaten face, thick with sweat.  Thoughts lost in introspection, the man let the water drip back into the stream.  Continuing on Her journey She felt the leaves fall on Her and carried them down, down.  Some slipped away from Her fluid grasp, and others joined Her.  She came now to a bridge and looking up She saw the face of a woman who saw peace in the waters below.  A single tear landed without a sound to join the gently flowing waters.  Though no one could tell, She wept as well as She passed under the bridge downstream.  Tall soft pine waving farewells in the breeze.

It was night when She first entered the sleeping city.  Dark houses are filled with slow breaths and strange dreams while the occasional streetlight reveals nothing but strays contemplating their next meal.  Further on a key slides in noiselessly and turns as a wayward teen sneaks back into their warm home, hoping not to be heard.  While the ever vigilant and worried parent is blanketed with calm knowing their child is safe.  As city center is reached, the dawn approaches and She turns into vapor as She wafts into the street, drifting and curling around corners.  It is Sunday morning and only a few vehicles pass on towards churches whose bells call to worship.  She sighs as hidden sins enter wooden doors and quietly sits in polished pews.  A few people shuffle down deserted alleys, failing to recall clearly the boisterous activities of the night before.  An old man with newspaper in hand opens a door and She follows warm smells of roasted beans for steaming brews and feels at home for a moment.  She passes by a woman in her 40’s dressed in Sunday best, who slowly stirs her coffee feeling ignored and unknown while her husband stare into his phone to learn the minutia of teams and players in upcoming matches.  She circles in behind the counter as a barista makes conversation with a young man, who is gripped in fear for how vulnerable and in love he is with her.  He contemplates what to say, but never gets it right.  And before the ventilation takes Her out into the streets again She passes by a manager thinking about his wife and young son at home who he had to leave on a Sunday morning to come in to work in a country that doesn’t rest as much as it should.

In the day’s heat She ascends above the growing bustle and looks down upon missed connections, lost opportunities, and people who have forgotten how to listen, to breathe in the air and be thankful.  It cries to Her, or is it a song of continuous discord?  She cannot tell.  It deafens Her as She continues to rise and feels Herself condense back into cohesion.  As the noise subsides She looks down again and sees fields of green and dives down like a giant tear to the spongy earth below.  She is drawn to the roots of a tree and took asylum in the xylem as She flowed up trunk and out branch and waited.  Each day She is fed to the growing fruit, incorporating Herself into the flesh.

The sky turns above and She hears Her benefactor hum a song of patience as Her branch becomes heavier with fruit.  And each day a young girl comes to sit under the tree, hoping for better days.  Hiding from the screaming of parents and breathing in the clean air to replace that dank smell of her father’s alcohol.  And each day She hears the hope, the hiding, and the relief of the young girl sit under the tree.  She hears Her kind slide down cheeks and get wiped away on pretty dress sleeves.  She hears the slow decay of an untended farmhouse, and the façade of a mother pretending everything is alright.  And then one day, with leaves fading from green to orange, the girl sits with head between knees, shutting out the world.  The wishing to be whisked away is like a piercing scream into the sky.  Ripeness hears Her call and She has no choice but to fall to the ground.  Vibrant in Her redness, full of sugar and quenching juices.  A thud that could be heard by no other, save someone sitting under the swooping branches, and the young girl’s head turns.  A soft rumble reminds the girl she is hungry.  And there was a meeting to never forget as she, but for a moment, loses all remembrance. Each bite slow and savored and She can hear the sound of laughter as She is consumed by the young girl.  From the lattice of fruity flesh to the dendritic flow of blood.  Through lung, to ventricle and atrium, the girl and She merge together as one.

Eyelids widen in the dead of night and She slips out through door in defiant trance.  With divine strength she climbs stealthily into hills and then on to rocky slopes rising like a fog in a valley breeze.  She is sustained by Her purpose alone and through 3 days and nights she climbs and climbs until white frozen ground is beneath Her bare feet.  Soft snow shuffles and She listens between gusts of wind for the calling of Her home.  As She gazes out at the wide world, the first of the sun’s rays dance of Her face, sweet peace is like a hymn from a jubilant choir in Her ears.  She sits down on Her throne of ice and closes Her eyes in glacial contentment.

I dedicate this poem to a new follower of my blog, who is really a wonderful writer.  I always appreciate writers who can just make words dance.  We all need some reading that just makes you smile.  Her site is here.  You probably want to visit her site instead of reading this nerdy poem. 🙂

A boring scientist enters,
One who knows clouds,
Beyond wisps and shapes,
Beyond layers and levels,
Past the undulating waves
That repeat but don’t repeat
Like a tessellation
That could only come from the hand of Escher himself

And should we be content enough to look up
Or look down,
If that beauty is enough
To tickle our imagination
Inspire our thoughts
Keep us floating above it all?
But a cloud is not just a cloud,
Let me take you in to see what you haven’t seen

Now we are at the top,
I know that’s very boring, but you know
Gravity and all
I didn’t make up the rules
If you’re cold that’s good…that’s normal
What you see might also make you shiver,
But I promise to deliver,
We’ll start with ice, isn’t it nice,
I threw in a bit of rhyme to keep you interested
We’ll throw in another rime later
Microscopic particles of dust want to be ice
They mimic it and vapor is only too happy to appreciate the effort
And water droplets formed from the warmth below 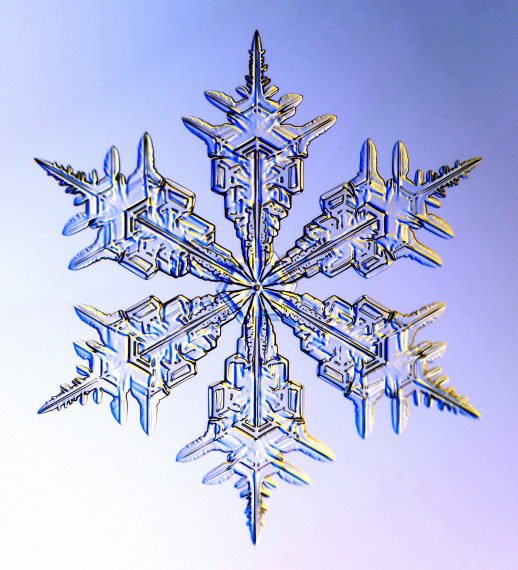 Have no choice but to form tiny crystals
Some are columns long and elegant
Some are dendritic prisms
Whose branches grow
Making ever so intricate patterns
In no hurry to make their descent
They insist on skittering and fluttering their way down
Photons refract their way through this hexagonal maze,
And sometimes they even say “halo”….er…”hello”
But I don’t just want to stay here
Or things will get too cirrus…er…serious

Before I have to be a gentleman and give you my coat,
Let’s move down
If your finding it hard to move down,
That’s the wind in your face
Clouds would like you to believe gravity isn’t the boss
Here in the middle we have at all
Right here you’re being pushed up,
Not too far away you can be pushed down
But let’s get to the heart of the matter
Here there are solids, liquids, and gas
And you’re looking a little frosty
That would be the rime I was telling you about earlier
It’s so beautiful it makes your heart melt,
But you won’t until we get further down
This is where it really gets amazing
There are trillions of droplets in this cloud
They are thawing and freezing, growing and shrinking
Now let’s watch the chase, squint your eyes
Bigger drops and crystals catch smaller ones

Coalescing, accreting, sticking
Millions of collisions each second
And the wind that blows up
Telling pellets and drops alike
“You aren’t done, you’ve got more to do,
I’ll not let gravity take you yet”
Hail embryos get aggressive,
Water droplets show patience
Can you feel the electric potential grow?
Let’s charge downwards and get out of the snow.

It feels a bit more tropical here,
Near the bottom of the troposphere,
Raindrops are big and ready to fall,
Eager to get away from it all,
Bloated drops fall and scatter to pieces,
As the speed of the updraft slowly increases
From one big drop you get ten,
Just to make its way down the cloud again,
Old drops leave, new drops form,
A wondrous, evolving, dynamic storm,
Look at those two, their picnic set,
They’re both about to get terribly wet
I’m sure the weatherman told them their chances,
But you know how very nice romance is,
I hope this poem precipitates inspiration,
Beyond the nuts and bolts of rain formation,
Now when on the cloud don’t forget to stop,
And think about all those crystals and drops,
There’s a world above and a world below,
But often in the cloud there’s a better show.