I was ‘talking’ with a fellow blogger who is a nurse, and as I am a meteorologist we were trying to figure out who had it worse.  Was it more annoying to deal with the “climate change deniers” or the “anti-vaxxers”.   I agreed his was more annoying, because while human induced climate changed is well-evidenced it is always going to receive a lot of political blowback in a fossil fuel dependent world and it is both a complex and new problem facing us.  Vaccinations on the other hand have worked so well and have eradicated disease so completely that people don’t remember why they even get them and instead have invented dangers to receiving them because they can no longer see the purpose.    It’s as routine as opening your mouth and saying “Ahhh”.  People don’t really question that, but it doesn’t inject anything into you and is sort of hard to get upset about, but I think when some medical advancement has been around so long and so successful we forget the reason and just see it as possibly something that isn’t necessary. 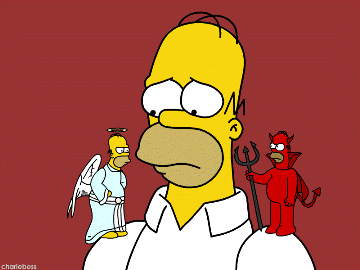 This led me to wonder if the same thing wasn’t true for how we understand morals.  One of the common things you hear from atheists is that many theists are under the impression that we do not have a moral and ethical code.  That such thing is not possible if we don’t have God and some supernatural system of punishment and reward.  I remember my mom, who is Christian, telling me at some point that our sense of right and wrong must come from God or else where would we get it from?  The general answer is easy of course, we are taught them by our parents and others.  We have authority figures that tell us what is right and what is wrong (even though you can convince a child that things that are wrong are actually write, like prejudice and intolerance).  The point is if as children we seem to get our morality from the authority figures in our life, perhaps it’s not surprising that many people, especially those who have no qualms about relying on the “rightness” of authority, that morality comes from what many consider the ultimate authority, God.  But it seems obvious to me that morality can easily be derived through scientific investigation.  Morality though has been around well before the scientific method, but humans have been around for a long enough time that we’ve been living a social experiment of morality and have simply been learning.  At one time the things we take as obvious might not have been overtly obvious, even though I think some of the big ones we could figure out rather quickly as they would not be a beneficial for survival.  Just like we stopped questioning why vaccines are important, perhaps we stopped questioning why certain immoral acts are wrong, such that people assume that it all must have come from some other plane of existence.

Some morals are certainly cross-cultural, like physical and sexual harm to other people’s children.  This one would be a pretty obvious natural (perhaps genetic) trait because our survival does depend on the survival of the next generation.  Anything that threatens that would be considered immoral.  Unfortunately in many places physically or psychologically hurting your own child is not seen as wrong.  It wasn’t so long ago here that, unless something got really severe, you were hardly considered in the wrong for disciplining your child with a belt or the back of your hand.  Some people still adopt that attitude unfortunately in North America, and it can be worse in other countries.  Regardless though we generally do go to ridiculous (and perhaps psychologically detrimental) lengths to protect children.  In general though killing is not quite viewed the same way.  Many think it’s okay to kill criminals (apparently it sometimes doesn’t even matter the crime…resisting arrest is enough), and killing in war is not only tolerated, but often cheered about.   For some time killing your wife in a crime of passion was often considered justifiable.  And many civilizations have committed genocide in our past and that has gone unpunished.   So even of the most basic commandments “thou shall not kill” isn’t clear cut, so this obvious sense of right and wrong we are supposed to get from God looks pretty muddy.  And if we are worried about some sort of eternal punishment system it’s amazing the ways we can justify killing when we need to dodge that one.

10 commandments.  Thus we already have human law deciding what killing is lawful and unlawful.  This is not an overly divine commandment already.  We know that before civilization we roamed in smallish hunter gatherer bands.  Maybe a few hundred people at most.  This was a time before Christianity, before the 10 commandments, so let’s assume this group doesn’t know right from wrong.  Like a small town, in these small groups, you knew everyone.  Surviving in the wild is not easy and everybody had a role to play, and everybody shared and worked together.  Studies of hunter-gatherer tribes today show them to be rather egalitarian in compared with much of civilized society so let’s look at this as a group that gets along.  So we have a group of a few 100 people, and because they have no God to tell them between right and wrong they think murder might be just something that’s okay to do.  What would be the results of a few people that decided to commit a murder every once in awhile:

Now there are probably even more things that could be listed as to why murdering would not be a good idea, the least of which

that we are by definition a social species for whom survival depends on our being in a group, and being able to work well in that group.  It simply isn’t in our nature to murder our own, and there is a lot of good reasons why murder would not be a good idea.  However when it comes to other groups, all bets are off.  We may be xenophobic due to bad experiences with other groups before, or simply be xenophobic because someone who we don’t know simply isn’t somebody we can implicitly trust, and thus we can justify killing others that are not part of our society.  This is why war is not against the law, but murder is.  We can do similar thought experiments with many other basic things that cause harm, like stealing, or any action that causes harm both physically and emotionally.   But even if it was not in our nature, this social experiment has been going on for some time and it seems quite reasonable to assume that even if there was not a morality inherent in us through birth, if at the very least we have a driving force to survive then many of the morals we have today would result through experience and observation and concluding how to survive better.

As a population we continue to adjust.  Different groups share moral truths just as they would share any other type of knowledge.  And so perhaps much of what we consider right and wrong is handed to us without that rediscovering process, but you can still see the impact of people doing the right thing and wrong thing today.  Because even though I think that on average humans are more moral in civilized society today than in the earlier days of civilization, we still have a ways to go.  People who are doing good and bad things are not of one particular faith or philosophy.  If you have compassion and care about how you make others feel, you will discover yourself how to behave in a way that’s more positive everyday as you grow and learn also.  It is the scientist in us that helps us become more moral.  If anything, the Bible demonstrates this more completely as the old testament has very much an eye-for-an-eye mentality, but the new testament is very much about forgiveness, redemption, and compassion.  Even God seemed to find a more moral way of dealing with enemies. Thus I don’t think it’s surprising that morality should progress in the same way that science does.

9 thoughts on “The Moral of the Story”