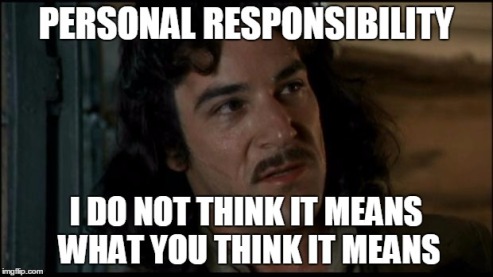 I’ve been thinking a lot about personal responsibility lately and just kind of wondering what it really means.  It’s phrase that gets thrown around a lot, especially in regards to politics.  Conservatives use the term quite a bit but often don’t seem to behave in a way that shows they grasp the meaning or try to determine if it’s actually true.

When I googled the definition it gave me this:

“Personal responsibility is the idea that human beings choose, instigate, or otherwise cause their own actions. A corollary idea is that because we cause our actions, we can be held morally accountable or legally liable.”

Let’s look at the truth of this statement first.  There are plenty of arguments that can be made to show that this does not reflect life in any way.  Simply because the choices that any one person has in front of them are simply different.  A person living in poverty has a completely different set of choices to make than a person who is wealthy.  Now let’s throw in a genetic background which varies across the human population.  Now let’s throw environmental influences.  now let’s throw in information about how the brain develops and how one can be indoctrinated or brainwashed into a certain way of thinking.  Now let’s throw in levels of education which vary.  We are all conditioned for a certain set of responses that is either likely or more likely, which I discussed in a previous post about free will.  And of course this idea of personal responsibility is used to imply that all poor people are lazy and are poor by choice.

Now even if this notion of personal responsibility was entirely true, why is it that we have a government who shows no personal responsibility?  And I’m talking about both sides of the aisle, both Democrats and Republicans.  We simply don’t have a government that demonstrate personal responsibility.  How often do we hear politicians admitting their own mistakes?  How often do they apologize for the suffering they might have caused?  How often do they apologize for the policies that haven’t worked or been implemented effectively?  How often do they apologize for not doing the things they said they were going to do?  Sometimes I wonder if the reason there is a lack of trust in government in this country has less to do with the fact that they keep doing stupid things, but rather not owning up to the stupid things they do.  I mean seriously would you trust somebody who lacked so much self-awareness that they didn’t even seem to care or notice that they are screwing you or other people over?  I know I wouldn’t? And that brings me to a bit of a side question.  Would you be more likely to re-elect someone who admitted to his/her mistakes or someone who denied that they made any?  I guess the answer seems to lean towards the latter because it seems we spend so much time trying to prove that someone made a mistake (and yes mistakes when you are in a position of great responsibility can cost people their lives), but do we do that because we know they won’t admit themselves, or were we really expecting them to be perfect?  The rest of us make plenty of mistakes, so does anybody really believe that those we elect are part of a select group of people who don’t make any mistakes?  Isn’t the most important thing that we learn from mistakes and don’t make them again?  Take the Benghazi situation. In hindsight it seems like a lot of things could have been done differently, and perhaps they will in the future, but shouldn’t we expect that with dangerous situations, even a slight error might lead to unnecessary deaths, and that such an error might be made by anyone?  Maybe somebody else might not have made the mistake.  Or maybe somebody wouldn’t have made the mistake 99/100 times but perhaps it just happens on the wrong day where they are more tired than usual and a mistake happens.  I’m not trying to imply that Hillary is guilty of any wrongdoing, but simply that expecting high ranking politicians to be faultless is a ridiculous high bar to set, especially given the high volume and level of decisions they make daily.

It seems to me that we have to allow for some error in judgment.  We should be able to expect politicians to be honest about admitting those errors and thus we can place values on their honesty and their ability to correct their own mistakes.  This to me seems to be an important part of personal responsibility that is missing from our daily lives.  Rich and the powerful always seem immune from the standards of personal responsibility that they hold to the rest of us.   Bill Cosby is a great example of a celebrity who placed himself above this standard, even though he certainly had a lot to say about African-American parents and being personally responsible.  Isn’t there something inherently untrustworthy about a person who does not practice what they preach?  What if Bill Cosby confessed what he had done.  Made some reparations to those he has raped, and turned himself in? We might not like him still, but at least we can appreciate a person who is taking responsibility for the pain that they caused.

In the end, it seems to me that “personal responsibility” is not a philosophy to center one’s self around.  It seems largely untrue, and even if it was true we rarely see it from the people in this world who should be the most personally responsible because of how powerful their positions, their influence, and their voice is. If one wants to believe in personal responsibility then let’s look at the factors that encourage people to be more personally responsible and address those issues instead.