And how much are we still losing?  Here are some important things to note about the state of women around the world:

Women are still very much treated like property.  It has only been in recent history that the dowry system has gone away in many parts of Europe and North America, but it is still quite prevalent in many countries.  The idea that a daughter’s family should have to pay, just to have their daughter become the property of a man, and that failure to give an adequate dowry ends in violence against the woman is deplorable. 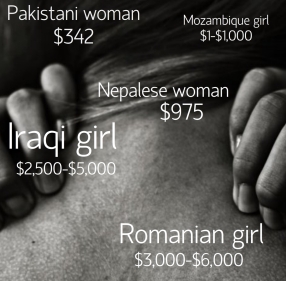 If this was not dark enough, when it comes to women being treated as property one only has to look to human trafficking.  Women make up 98% of all humans sold for bonded sex or labor.

When women are seen as objects or property rape is even more common place.  These rape statistics are truly horrible to read.  And if you want to get all picky on how hard it is to collect rape statistics and you don’t trust these numbers you can factor in a liberal margin of error and still be see some devastating numbers.  And the difficulty in ascertaining how common rape is, should give you more cause for alarm than less.  Darkness is much more successful remaining hidden than exposed.  Some highlights from the linked article (which is well referenced) is that somewhere between 60-99% of all rapes are committed by men, and 91% of rape victims are female.  Also 97% of rapists will never spend a day in jail, and to those who think there is a large amount of false rapes reported, this number ranges only between 0.7% and 8%.  So even by your most liberal margin of error the raping of women is far too common.  Especially given that it is estimated that only 40% of rapes are reported to authorities.  These statistics are largely just from North America where rape statistics are easier to gather. A U.N. study found that “worldwide, a whopping 25% of men (1 in 4) had raped someone in their lives. 1 in 10 (10%) had raped someone who wasn’t their partner.”

Not unrelated to the points above is the greater crime of outright killing of our daughters, both in the womb and without.  In countries where women have limited opportunities for employment, where women will cost their family great financial burden from having to pay dowries, females are aborted or killed as babies disproportionately.  While this number favors countries of India and China, it estimated that about 200 million females are aborted or killed as infants every year.  That is 1/35th of the world population.  In other words 3 out of every 100 pregnancies end in death for that fetus or child solely on the basis of gender.  As I’ve argue before there is a strong correlation between abortion and infanticide and what the cost of that child is to the family.  A woman is a cost and a burden to many families.  There is logic or rationale for why this must be so.

On how much money can a daughter bring to a family if she is uneducated? In a not too terrible statistic 53% of the world’s out-of-school children are girls, however, 2/3 of the illiterate people in the world are women.  Indicating a different quality of education for women, or different amount of time girls are allowed to stay in school.  Educated women make better choices about their health and pregnancy.  For example in Mali, women with a secondary education or higher has an average of 3 children, whereas those with no education have 7.  Women without education tend to not use birth control or even know about it, thus uneducated people, who can provide less successfully for their children have more of them.  In Pakistan the difference between gender in education is an astounding nearly 700,000 less girls being educated instead of boys (although to be fair an even more astounding statistic is that over 5.5 million children are without education in Pakistan).

What do the statistics say about women and politics?  Here is a list of major countries that have only within the last 125 years or so have even given women the power to vote.  For much of “civilized” history women have had little or no say in choosing who governs them.  And how do we stand right now on the role of women in actually governing?  This link shows the incredible disparity in representation in government around the world between men and women.  Perhaps the most telling statistics from this article is that what is considered a successful benchmark for women in government is 30%.  Women make up 50% of the population and yet a goal of 30% is considered admirable. Few countries have reached that benchmark.  Currently only 22% of all national parliamentarians were women.

In science trends are more promising.  Women still only make up 42% of all science careers in the U.S.  A great international study that looks at the role of women when it comes to published scientific papers, finds that males outnumber females as lead authors in every country.  The authors admit that this may be due to the predominance of senior scientists that are men and this may hopefully change in the future, but currently women are still under-represented in science.  The study also notes “despite more than a decade of policies aimed at levelling the playing field. UNESCO data show that in 17% of countries an equal number of men and women are scientists. Yet we found a grimmer picture: fewer than 6% of countries represented in the Web of Science come close to achieving gender parity in terms of papers published.”

I won’t even pretend to have even listed all issues women face.  There are of course many others, a lot of them ripples of the deep impact from the even greater patriarchy of the past.  Even those ripples will take time to calm, and return us to equilibrium.

I am not insensitive also to issues that men face, some are very harmful and perpetuate the very serious realities that women face also.  Men have their burdens, but it is clear than women have the heavier load.  A burden they never chose to carry, a burden that men have given them.  This is not the oppression of a minority; this is the oppression of half of the human population.  Oppression so deep and ingrained that many women are even complicit to their own oppression, thinking that the extra burden they carry is normal and deserved.  I don’t care to point out how religion plays a role in all of this, although gender bias is deeply ingrained in many religious doctrines, and denying many women a place in the religious hierarchy.  The point is, there is zero moral justification for the way so many women are treated in this world.

To all the women who weren’t able or aren’t able to be all they could, I just want you to know that as someone who continues to strive towards being a better feminist, I hear your voices.  It may do no good to wonder what could have been, but we all should be in the business of wondering what could be.

*I dedicate this post by my friend Victoria over at Victoria Neuronotes.  A more intelligent and compassionate woman you will not meet.

16 thoughts on “The Long Silencing of Women”