When I was 12 years old I went to Bible Camp.  It was my first time going to camp, going away for a week without having any parents, grandparents, aunts or uncles.  Luckily my second cousin went so I would know someone and that was probably the only reason I wasn’t too scared to go.  I am not sure why my mom chose to send me to a bible camp, but as a Christian I am sure she hoped that I was receive some good education about religion, the bible, etc.  When I was there I was eager to impress the counselors and leaders.  They had a bible verse a day and a contest at the end to give a free camp hat to anyone who could memorize all the verses.  I was the only who could do it.  I used to have a good memory.  Maybe I still do, I just can’t remember.  At camp they also talked a lot about prayer and how praying could help you get the things you wanted in life, as long as you were good and you really believed.  For me the idea of prayer was exciting because I thought maybe it could work to stop my dad’s drinking.  So I opened my heart and let Jesus Christ in.  The counselors were so happy.  All of them congratulated me.  They were so kind and so pleased with my decision.  After camp was over, I was so excited I had made the decision because I knew it was going to make others in my life so happy.  My mother, my grandmother, aunts and uncles.  And on top of that I was told that if I was good and really believed that my prayers would be answered.  I had many tangible reasons to be very happy about it all.  It had very little to do with heaven or hell, or some events on alternate planes of existence, but the way it made others in my life happy, and the way it might help my dad to stop drinking was very exciting.  Of course none of my praying made any difference to my dad drinking and in the end the excitement of my decision to let Jesus into my heart faded and it became clear how the entire belief system had any relevance to life if one of the things they touted the most didn’t work.  I believed as much as a 12 year old could.  But the fact that prayer doesn’t work is not really the subject on my mind, but rather that as I reflect I see how much of a child I really was.  I completely didn’t understand the complexities of the religion or the Bible.  I was clearly caught up more in the joy that the adults in my life felt by my decision rather than really grasping the importance of what a religion means to someone’s life. 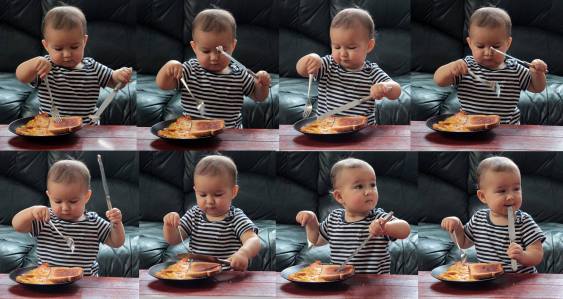 It takes very little time with an infant/toddler to see how much they want to imitate others.  And while I am sure there is an evolutionary aspect to this, because obviously if we have survived as long as we have, it makes sense to copy our parents, but what is also clear is our reaction to that imitation.  Because when he successfully uses a fork, or successfully gets up on a chair by himself, climbs the stairs etc, there is much applause.  There is much excitement and happiness.  All in the house are happy and pleased at this ability to accomplish these tasks that move them closer and closer to adulthood.  Every child can’t wait to do things older people can do. They can’t wait to grow up.  As children we are always looking for the approval of our adults.  We may rebel when we don’t get it, but initially, we want to be noticed by those we look up to.  As children we are somewhat helpless and getting adults to like you and notice you, is a way to make sure that they take care of you, teach you, spend time with you.  If you can impress an adult then this is a bonding experience.  Something we all seek. 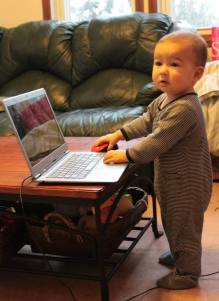 For all my dad’s faults he was fairly adamant about choosing a religion as being a choice to make as an adult.  That children didn’t have the capacity to understand the decision and thus did not want my mother to influence as children.  This was not something my mother or Mennonite grandmother could really help doing, but it was certainly tempered compared to many other children and I am quite thankful for my dad in that, because it’s clear to me that he was right.  Even at the age of 12 I could not understand a religious belief system.  From my mother I may not have adopted her belief system, but I learned about her charity, her kindness, her compassion, her perseverance, and the fact that she is someone who likes to ask questions and research the answers.  As I watch my child grow I can see that it’s less important what I believe, but rather how I act.  These are the things that will shape him.  Brainwashing him into a certain set of beliefs seems pointless over my actions being moral.  My child was born an atheist and if he decides that he wants to pursue a belief system as a guide to live his life then it will be his own choice, not because I’ve prescribed a doctrine for him to follow.

With the idea of God being “our Father”, I sometimes wonder if God isn’t the ultimate helicopter parent.  A way for people to still constantly seek approval from a parent-like figure.  It seems somewhat unnatural to me now to maintain such an attitude into adulthood.  As children it makes sense to have this attitude, but as adults we are supposed to no longer be seeking approval and be the role models for our young.  I guess as social animals it’s easy for such hierarchies to remain.  The only problem is, if there is no God then all we’re really doing is trying to make a non-existent entity happy and a lot of difficult to interpret texts written by men on what God actually wants to be made happy.  That seems like a wholly unhealthy way to live life.

23 thoughts on “Imitation and Approval”