I was at the gym the other day and there are a number of TV’s there and as is often the case ESPN Sports Center was on.  I couldn’t help but notice the difference between the male and female anchors.  The females standing in there skirts or dresses, never below knee length, always wearing heels.  In fact one anchor, Nicole Briscoe, was recently complimented with “respect for being pregnant while also wearing heels”.  Alternatively, the men were well dressed and looking comfortable.  It is of course a massive double standard and sports isn’t the only place where such a double standard exists, but I couldn’t help but thinking even if we have a standard of beauty that we say we want to appear on TV such a standard is not evenly applied to men.   Men aren’t forced to wear tight fitting clothes, clothes that actually might be restrictive or uncomfortable.  When you look at the the bios of all the ESPN staff, anchors, reporters and columnists, you can see through these many pages a trend in the women all being fairly attractive and reasonably young unless they are a very famous former player.  What’s clear is that when you look at the men there is no similar standard.  While they all may be required to be smartly dressed the standard deviation in age, height, and, in my estimation, attractiveness is far greater.  Women must fit a narrow mold, while men are allowed to represent the diversity of body shapes, facial features, ages, and levels of balding.

More disturbingly than this is the level of vitriol that often women face who are involved with sports writing and sports reporting.  I recently posted this video on Facebook but I thought it was important enough to post on my blog as well, because I think it’s important that we be vigilant about counteractive the horrible comments these women received.  This video was hard to watch, and that’s what tells me that it might be worth it for a lot of people to watch it.  The comments these women received reminded me a lot of the type of comments that Anita Sarkeesian has received by trying to introduce a more balanced female perspective into the video game world.  It seems to me that sports are still seen as a male domain, and intruding on that domain has costs to women who try to do so.  If you aren’t pretty to look at, you shouldn’t be there.  And if you try to be more than just a pretty face, like have a mind, then you are going to be sorry.  This seems to be the overall message.  Just anecdotally I tried to look at a couple of the female profiles on twitter to see I could see additional evidence, and what I found is that horrible comments, like the ones in the video happen but are rare.  However, what you also see are plenty of comments objectifying the reporter/anchor.  Comments about how hot she is, or her legs, and as you can imagine worse at times.

I try to focus on the progress that has been made and try to remain hopeful.  Double standards are getting less in the music and entertainment industry.  Sports for women are gaining more popularity and more air time.  I try to remind myself that 20 years ago, seeing a female at all reporting or as an anchor on a sports show was unheard of unless it was a sport which actually involved women.  There seems to be these last bastions of maleness in our culture which is being fought against with all the misogynistic vitriol they can muster.  Some might argue that it is the internet that allows these people to express such horrible words in a largely anonymous fashion, and maybe that’s true to a certain extent, but it also exposes such behavior as well.  I have a hard time believing that such attitudes are a function of the internet, but rather just a larger forum of expression for attitudes that already existed.  This video reminds us that even if we aren’t saying the words to someone’s face they still have the same impact, and I also hope that this video reminds men to pay attention.  These men had an extremely hard time saying these things to the women, and it is likely that they aren’t the type of men who say such things, but they can be part of the solution which is to call out such despicable and hurtful behavior.  Not to be chivalrous or to gain favor with an attractive sports personality on, but simply because it is the right thing to do.  Do it equitably, to all women who are trying to make a living doing something they enjoy, whether it is on social media or a night out with the boys.  And maybe you won’t change any minds, but to be apathetic to such attitudes towards women is the same as compliance in my opinion.  And even if it is only words, we all know what a short road from words to 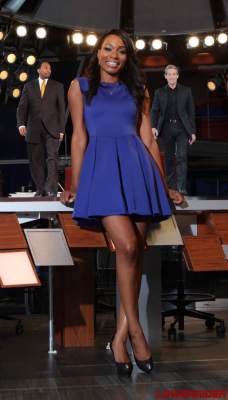 actions there is.  I’m not saying twitter attacks are always the best way to combat these attitudes, but I encourage men to take up the mantle of fighting these attitudes in a manner that seems most effective to them.  At the same time maybe we can also change the standards by which women are placed into these roles.  So it’s not just about what they wear and how pretty they are, but by their passion and knowledge for sports (or whatever subject they are passionate about).  Perhaps if we only want a woman on TV for her pretty face and tight clothing, is it any wonder that so many men only see them as being valuable for such superficial qualities?

9 thoughts on “Women in the Man Cave”