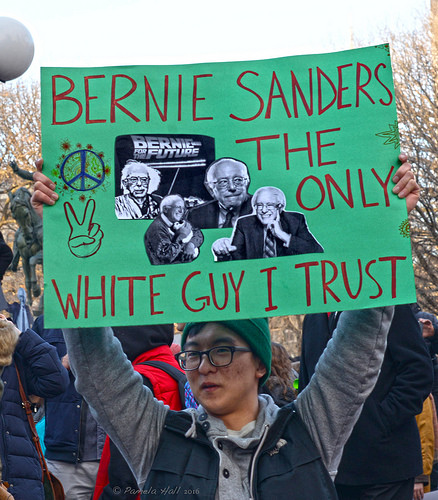 Bernie Sanders is my guy.  He is a true politician no question and to see he is without strategy would be incorrect, but that strategy I think is an honorable one.  He is trying to have important conversation about real problems that are impacting this country.  He puts forth solutions to those problems.  They are from the perspective of democratic socialism.  As a Canadian I adore democratic socialism, but I can tolerate people having different points of view on the matter.  There are those who have different political ideas.  I would love to see more politicians like Bernie Sanders coming from different sides of the political spectrum.  Actually they exist in the likes of candidates like Gary Johnson and Jill Stein but for a large part, well you know what kind of candidates we got this election cycle – panderers, double-talkers, hypocrites, liars, and those who are ethically questionable at best.  It’s a real problem.  Should we all fall in love with, what I think is at least a good

model of a politician.  While my heart tells me yes, I know it’s only because I agree with him.  In the end, for many, it’s still a hard thing to do if you disagree with his ideas.  As I wrote before, among his qualities, ideas and principles I admire is that he tries to be inclusive.  He has reached out to evangelicals, he has spoken in some very conservative areas that some democrats dare not go, and he has even tried to empathize and connect with Trump supporters.

So why should such a man have supporters who are much more extreme than the man himself?  As I’ve watched his message reach people and move people there is no question that he is reaching many people on both an intellectual level and an emotional level.  Ultimately, Bernie like any politicians does play to people’s emotions too.  And there is nothing wrong with that.  While I do think he also have some very intellectual things to say, he knows that to move a large group of people in favor of your ideas it isn’t all going to be done with logical arguments.  It’s going to have to start with emotion.  Many of the things that Bernie Sanders talks about are things you should be mad about, are things you should worry, are things you should be passionate about.  But as I’ve watched people “feeling the bern” over the course of his primary run it’s been interesting to see how many Bernie supporters have become very similar to Trump supporters.   I know I am going to get backlash for saying that.  But many pundits, writers, and just people in general have noted how much anger one gets any time there is criticism of Bernie.  First I’d like to say that I’m not criticizing Bernie, I’m criticizing a portion of supporters who worry me a little bit.  Now let me also qualify when I say “like Trump supporters” I am not saying that you’re racist, misogynist, or stupid.  It should also be noted that such a generalization of Trump supporters is not that helpful, but I am speaking in terms of stereotypes intentionally.  What I mean by “like Trump supporters” is quite simply zealotry.  A zealot is a dangerous thing, regardless of how righteous the cause.  You can be 100% right about something and still be a dangerous person.  If you’re in a state where you cannot be reasoned with or compromise, if you’re in a state where you are willing to go to any length for your cause, if you are in a state where someone is quite simply for you or against you just because they disagree with a portion of your argument, that’s a dangerous place to be and it can be extremely destructive.

I have seen the emergence of the Bernie or Bust movement and I honestly find that movement a little troubling.  People have chosen to take their stand.  Taking a stand at times is very important, but I think we need to ask ourselves, whenever we take that stand, “what do we hope to gain?”, “what is the best way to make my stand?”  and “what are the consequences of taking that stand?”  I truly believe that Trump is an extremely dangerous man to have as president.  His policies, if enacted jeopardize religious freedom, increase the suffering for the poor, minorities, and women. Refusing to vote Democrat carries that consequence.  Are we ready to hand over the judiciary branch to the conservative platform?  Refusing to vote Democrat carries that consequence.  And there are a lot of important issues that get decided by the Supreme Court as we have seen over the past decade.  We know how important the supreme court has been for issues like gay marriage, the ability for public teachers to unionize, gerrymandering, affirmative action and health care. And who knows what decisions might get overturned.  Roe vs. Wade?  Marriage equality?  I am not trying to convince you through fear but only ask that we all carry these ideas in our heads and understand the full weight of our decision.  Also can we not make changes even if Bernie doesn’t get elected?  Can we support more grass roots candidates for the legislative branch?  At the municipal or state level?  Can we do a better job of participating in mid-term elections?  Does the DNC really think they need to make changes when most establishment politicians are already rich, and even when not in the majority still enjoy a great deal of wealth and power? Again maybe Bernie or Bust is the best call right now, but I see less and less reasoning and weighing of the evidence by Bernie supporters as this primary comes to a close and it looks like Bernie will not be the choice to run as president for the Democratic Party.  So again I only ask that we carefully weigh the pros and cons of sticking by our guns at all costs.  Bernie was never going to be our savior.  At best he is sowing the seeds of some positive change and if he became president we could see those seeds grow a little bit more, but we would still be a long way from seeing the flowers bloom.

There may come in a day where a large majority of us are happy with a more democratic socialist way of life, and today is not the day.  And I’m not trying to just single out Bernie Sanders fans here, it just seems interesting that what started as one of the most thoughtful, passionate, and intellectual movements and devolved into something that it should not in a country that has real problems and needs to work together to solve them.  Continuing on a path of divisiveness and stereotyping the other side doesn’t lead to revolution, it leads to civil war, and I’d rather take a peaceful piecemeal progression towards a better way of life than a bloody one, which by the way, in the end, your side might actually lose.  The idea behind a democracy is not one of…”hey we won…suck it you losers who disagree.” Whoever become President becomes leader of the country, of which, regardless of our political views, we are all citizens and have the right to be treated with humanity and civility by that leader.  We also must demonstrate that towards each other.  Does attacking Trump supporters really teach them a lesson, sway them towards reason or a better way of government?  The most important quality, to me, of Bernie Sanders besides his ideas is his principles for inclusion.  If we truly support Bernie Sanders, I think we must carry that torch more than any other if this country is going to reverse our decline in quality of life and heal a nation which continues to grow ever more divided.

10 thoughts on “Feeling the Bern, Taking a Stand, and Zealotry”