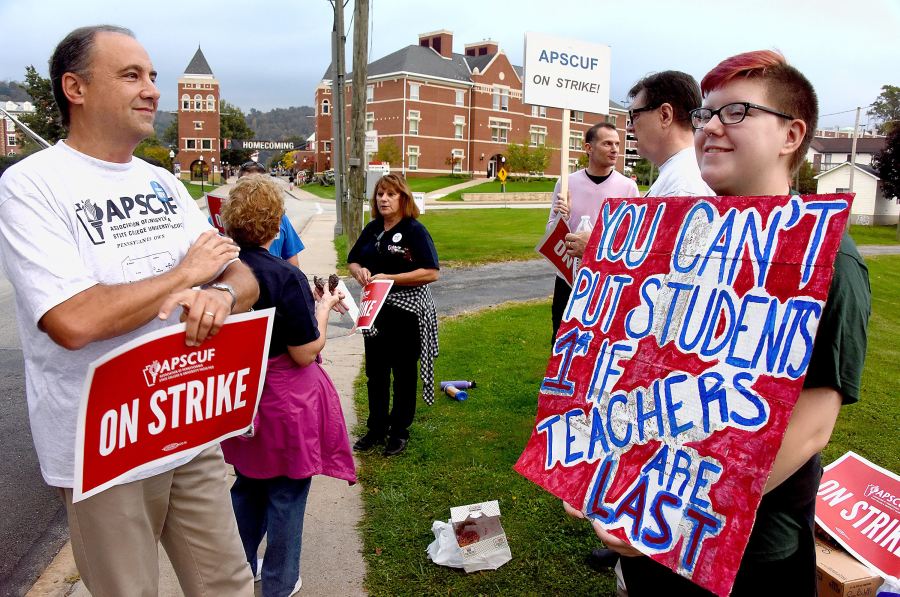 Well the strike of faculty in the Pennsylvania State System of higher education ended after 3 days of class.  Given that I had a couple of blog posts leading up to the post I thought it might be useful to sum up.  Before I get into the details of the agreement I thought I would start with some more personal observations.  I have never been on strike before and I found the experience interesting.

I think it was initially just odd because I think we all expected a last minute agreement.  It was also an odd feeling that I then became a truant, somebody who wasn’t fulfilling his contractual duty and for all intents and purposes didn’t have a job.  On the picket line we stand outside the university grounds and it was weird to get locked out of any access to campus systems as if we were just another person who didn’t work or attend the university.  I understand how it goes, but it feels a bit cold for a place that you’ve invested the last 14 years of your life in. 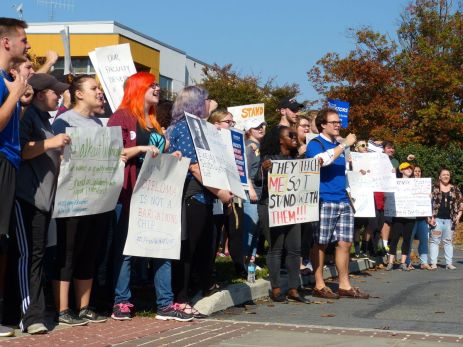 On the picket line the feeling was definitely more positive.  There were so many students who supported us.  They honked their horns, came and stood with us on the picket line, and delivered snacks and water.  I really can’t express how much strength it gave all of us to see the student support.  We also had some support from grade school teachers who had recently gone through strikes of their own who lent support.  I really thought you would just be standing their on the picket line and then would have to walk to the closest fast food place in order to get lunch.  I’m pretty sure I gained weight on the picket line with all the food that was brought to us..

There was also an intense camaraderie among faculty.  I saw many faculty I hadn’t seen in a long time as our separate “lives” in separate buildings often keeps us from interacting frequently.  I met faculty I had never met before and we had great conversations in getting to know each other better.  Despite the individual or department oriented battles we normally face every day, on the picket line there was a common sense of purpose that was a wonderful feeling.  And even though the strike is over, there is a part of me that misses that feeling.  I am sure I would feel differently if it was a cause I didn’t believe in, but when you mix in that feeling that you are fighting for something you think is important, with a group of people all feeling the same way, it’s powerful.  More powerful than I imagined it would be.  As a consequence there was also a darker side to this.  I am not sure what it all means yet but I found myself having an equally intense set of negative feelings to those who crossed the picket line.  There were a few.  While I know, intellectually that different people might have legitimate reasons, it was a sacrifice and a risk for all of us.  I even know someone who had very intense health problems and still went on strike.  I’m struggling with the empathy and already lost somebody who I considered a friend who crossed.  And I have another one that also crossed and am not sure how to deal with it right now.  Well so there’s that. “Group think” is a powerful force.  Although I’m happy to say that it still wasn’t cause enough for me to want to chant.  I’m not chanter.  🙂

So how did it all end?  Well I am happy to say we won.  Well sort of.  For those who believe that it was about the money for faculty I think we more than effectively proved them wrong.  After going an entire year without a new contract and losing the normal small increase in salary we usually get to keep pace with inflation, our final deal revealed very little salary increase and most of it was negated by health care cost increases.  We did reduce some of the deductibles slightly as the increased health care costs really impacted those faculty who themselves or their family have health problems.  I am happy to say that we did effectively eliminate all items from the table that reduced academic quality that I talked about in my previous post.  We also made sure adjuncts were treated fairly.  The biggest downside to it all is that the contract was short term.  It was only a 3 year contract, retroactive to when the last one expired.  So this contract will expire in May of 2018 and we’ll have to go through negotiations again.  Ultimately it’s disheartening how much the state wanted to degrade quality education for the purpose of money.  It seems apparent that they know the truth: that faculty really care about their students and educational quality and they can keep trying to degrade that and force us to take it on the chin in terms of salary.  Our increase in salary was half of what other state unions were able to get.  For most other unions it is just about salary and benefits, but our contract contains a lot of things that impact educational quality which can be used as leverage to keep salary increases low.  In a normal world, one might expect new contracts to contain things that enhance educational quality not weaken it.

With the way education is being attacked in this country I am thankful that I am in a union and that other educators have unions as well.  I naively thought it was kind of a silly thing when I started out.  It didn’t occur to me that such a large portion of society wouldn’t see it as important to always invest in and make better, as opposed to running it like a for profit business.   Currently the state schools in PA get appropriations that cover only about 25-30% of their costs.  To me this isn’t public higher education, this is a private school system with some state subsidies.  No wonder tuition costs continue to rise.  I suspect this strike is just one of many future battles we’ll be facing, and I’m ready to keep fighting.

Here is my theme for the strike as I was the PR person and was hounded by reporters at times and “could not be everywhere at once”.