Recently I listened to a podcast interview with Andrew McAfee who has written a book called More from Less.  The message of this book is meant to be positive along the line of Steven Pinker’s more recent books.  Illustrating that things aren’t maybe as bad as they seem, or at the very least we have reason to hope.  While I am reticent to make critiques of a thesis without having actually read the book, what I want to say is more about the foundational premises he builds his book on, and I think the 90 minute interview gives me a good basis for discussion here.

For those of you who don’t want to listen, I will give a brief summary here.  I will say at the outset that he is very pro capitalism, but I’ll be honest, out of anybody in favor of capitalism that I’ve listened to, he makes the most compelling arguments.  I should also point out that he is not anti-regulation, nor is he libertarian and thinks that capitalism can solve every human concern.  Anyway, the basic thesis of his book is that we currently live in an age where human prosperity shows signs of decoupling from the nearly one to one correlation we had since the industrial revolution of natural resource use.  With quite a lot of data he shows since the 1970s we’ve been continue to grow economically, while using resources at a continually slower rate.  The reason he attributes to this transition is because of our improved technology along with the fundamental ways in which capitalism works.  I’ll go into details in a moment.  I want to preface the discussion also by saying that he is not anti-climate change or anti-EPA.  He admits the dark past of capitalism, but feels that the coupling with technological advances has helped capitalism be a more positive force.  Like many of us I guess, he sees the good parts, and doesn’t want to throw the baby out in the bathwater.  I always resonate with this mentality, and for those who know me, know I am not completely anti-capitalism.  I do also see some good parts, but there are also parts that are deeply troubling to me and so a mixed economy seems the most reasonable to me. 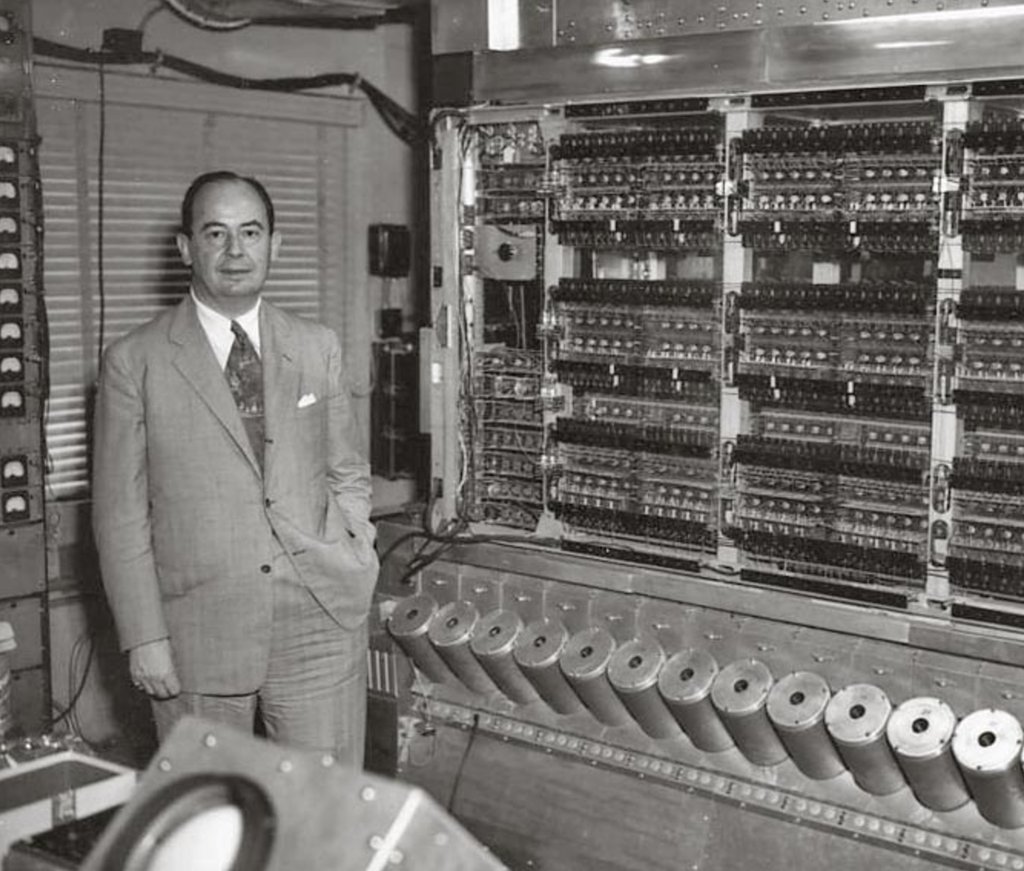 The technological save for mankind her argues is the computer.  This is not a new idea, and in fact I wrote about this a little before on my blog when I talked about Douglas Adams’ ages of sand.  After the lens for the telescope and the microscope opened up the macro and micro universe, the silicon chip came along and revealed to us the process.  We could do enormous amounts of calculations so quickly that this allowed people to solve problems in a tiny fraction of the time it would have taken them before.   McAfee gives several examples of how computers helped businesses and corporations reduce waste.  Their motivation to reduce waste is of course motivated by profit, but as a result less resources were used.  One example was the aluminum can.  If you are my age or older you know how thick cans of soda used to be compared to now.  Cans today still function perfectly but use less material.  Being able to model pressurized liquids in cans and tweak thicknesses and model the impact of that thickness allowed for vast savings in resources used by beer and soda companies.  Since companies need profit for growth they have no incentive to be wasteful when it comes to materials.  Now I’m sure class action law suits also convinced companies to stop raping the Earth, but I take his point and I don’t deny that it’s true.

His pro-capitalism stance is largely based on the fact that so many private companies and innovative production methods and the advent of fossil fuels raised a large amount of people out of poverty.  Life expectancy when up dramatically as infant mortality dropped significantly due to indoor plumbing and parts could be made more quickly and in massively higher amounts to give a large population of people access.  Being able to unleash the energy stored in fossil fuels powered companies of all kinds to bring lifesaving and life altering technologies to more and more people.  Populations exploded as a result of the increase in prosperity.

For McAfee the future, if we are going to have a better one, he argues that we must have more of the same.  We must have continue to have capitalism working to develop technologies that will use less and less resources for creating growth, and this can be guided by smart government policy.  He is in favor for instance of a revenue neutral carbon tax that gives money to people at the bottom end, and encourages corporations and businesses to work to cut fossil fuel usage.  What he doesn’t advocate is that we are all going to return to some idyllic pre-industrial state and he argues, I think quite convincingly that we weren’t this idyllic sustainable group of people prior to the industrial revolution, and that now with the world population as it is, we need energy and only the development of better energy sources is going to help us deal with something like pollution and climate change.

So fundamentally I think my disagreements come from the fact that first even if we are using less resources, those resources are still finite, and if we aren’t concerned about the continuing growth of people we will simply run out of important resources we need.  Is there always a technological solution out there waiting for us?  Maybe, but we don’t know that for sure.

The second thing I question is whether or not it is good that the population exploded as it did in the last 100 or so years.  Is this prosperity?  Is this a good way to measure prosperity?  The fact that we might have the ability to effectively support human beings, doesn’t mean that we necessarily should.  It seems to me that the technological advances of the industrial revolution were so powerful that human population grew unrestrained, requiring the continuing need to use and extract more resources.   Is it true that we might not have invented the computer if we grew human populations at a rate that lead to a more sustainable society?  Are these technological advances only an answer to some threshold in the amount of suffering on the planet?  Was the computer something that could not just as easily been invented with half the world population at the time or was there a drive to invent something that could solve innumerable problems that were occurring because the world population was as high as it was?  It’s not obvious to me that this is the case.  It’s not obvious to me that prosperity for a creature with such a high level of consciousness should simply be defined by our growth in population.  If we continue to grow in population this just seems to put us in an endless cycle of trying to have to develop new technologies to alleviate the suffering of the increased population.  And even if we are getting more out of less, eventually something will run out, and technology simply won’t save us.

Finally, I am left with the old moral philosophy question:  Does the end justify the means?  Let’s say capitalism was best equipped to increase human prosperity and not destroy the Earth at the same time.  If we are using less and less resources because some CEO is trying to make more money does it matter that we are doing the right thing for the wrong reasons?  Capitalism is not a moral philosophy it is just an economic system.  And while I enjoy listening to this well-educated author, his optimism, and his well laid out arguments, he is in the minority it seems when it comes to those who celebrate capitalism.  For many the mindset of growth trumps other human concerns, even if that mindset sometimes producing good ends, it often leads to many downstream problems.  There has to be room for human rights, happiness, respect, empathy, etc.  If it is possible to practice a brand of ethical capitalism it must look different than what we have had in the past and even what we have now.  I see very few capitalists adopting McAfee’s views, and I find myself very concerned about a society that puts profit in front of all other values.  If capitalism does have any intrinsic value in it, then it needs a better marketer than Wall Street, and banks, and mega-rich billionaire CEOs.

McAfee does admit that income inequality is an important issue, although in the interview offered very little solutions to that.  I suspect he feels like there policy solutions that don’t involve a high redistribution of wealth, but he didn’t go into a lot of details.  There are a myriad of other issues he didn’t address in the interview such as education, and health care which I think don’t lend themselves well to the capitalist economic model yet are important in a society.

He did also address the problem of growing economies in other parts of the world.  He doesn’t worry as much that they will do things as “dirty” and irresponsible as we did, simply because new technologies are available to them at a cheaper price than what the U.S. had when our economy started growing rapidly.  It’s a fair point.  But even if we can use less of resource A to produce a 1 KW of energy, or 1 mile of fiber optic cable, with a lot more people wanting those resources it still seems like an issue.  And if we are expecting technology to get us out of our biggest problems while also devaluing education, as seems to be the case in this country, I don’t see things as getting better quickly enough before we hit the wall.

Overall it was a thought provoking interview.  I don’t know if I feel more optimistic, but I at least can acknowledge that the conversation about what we can do is broader than the conversation we are having now.  On the topic of climate change I feel this is largely because our conservative, pro-capitalist party can’t even admit that we have a problem and this leads to a very narrow range of solutions.

30 thoughts on “Does Capitalism always Give us More from Less?”